As I was sitting on a bench outside of the screening and treatment room at the Guan Yun Xian Yang Hospital, a curious little boy was smiling and pointing at me. He was shy and hid behind is father’s leg at first, but when I waved for him to come sit next to me his face immediately lit up. I began showing him photos on my phone of the various countries I’ve visited this past year with CureCervicalCancer and he excitedly started talking to me in rapid Chinese. I couldn’t understand a single word he was saying, so I went to get Arrow, our translator.

When the boy spoke to Arrow in Chinese, she couldn’t control her laughter and gave me an awkward look before translating to English. The boy had told her that I was the first white person he had ever met in person, and that he only knew about white people from movies like “The Avengers.” At the sound of this I cracked up with laughter too and asked him to take a picture with me. Then he sprinted away and came back a minute later, hilariously huffing and puffing, with a blank piece of paper and pen in his hand. I laughed again and gave him my autograph, then ripped a sheet of paper out of my notebook to get his autograph in return. His name was Gu Wei Weng.

Then Gu looked up at me with glowing eyes and told me, “Thank you so much for coming to my village to help train my mother and for helping the women here.” He wrapped his arms around my body giving me a giant and unexpected hug as his father stood there smiling ear to ear behind us. My heart instantly filled with warmth and I was completely taken aback. Gu’s mother, Wu Jie, was the main Gynecologist that we were teaching cryotherapy to at the Guan Yun Hospital and has served her community all her life. Gu was maybe only 9 or 10 years young and stood 4 feet tall, but his words left an impact on me that I will never forget.

For the rest of the afternoon, Gu became my best friend. He followed me around the hospital, held my hand, and told me about his favorite American movies. I couldn’t help but smile at how adorable he was and let him know that I was lucky to have met the coolest little dude in all of China. Then he sprinted away from me and when he returned, hilariously panting again, he handed me a gift. It was a picture book titled “The 7 Habits of Happy Kids.” I felt honored and didn’t know what to do, so I opened my backpack and handed him my Wisconsin Badgers hat and explained to him that this is where I went to college in America. His eyes widened, and his parents, continuously thanking me and beaming with approval, asked me to take a picture with them. 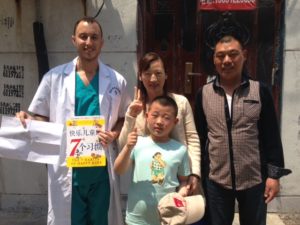 Stories like this are common in my experience with CCC, however each time something like this happens it makes me feel incredibly proud to be a part of this organization. Often times our team gets so caught up in all the preparation and tireless work we pour into each mission that we forget to step back and notice the true impact we are making. Gu Wei Weng touched our hearts and served as a wonderful reminder that our work is appreciated and impacts the lives of not only the women we treat, but of their families and communities as well.