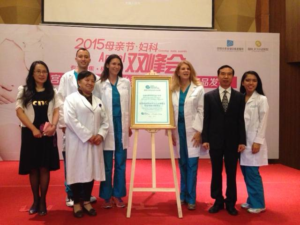 The immensely warm welcome that the CureCervicalCancer Team received upon setting foot in this private hospital set the tone for the next few days. We were enthusiastically greeted by the hospital’s president, vice president, and head of Gynecology Department, among many others. Upon entering a large auditorium, the team witnessed a spectacular site: a large pink welcome banner marking this momentous occasion. In an elaborate ceremony coupled with Olympic-worthy background music, the President of the Angel Hospital removed a red velvet cover to unveil a plaque which he handed over to Dr. Patricia Gordon.

Following this ceremony, the CCC Team gave a didactic lecture on CIN and See and Treat to the hospital’s gynecologists and quickly commenced the practical training portion. With two screening and treatment stations set up, the CCC Team and Angel’s gynecologists saw a select group of women whom had never received a pelvic exam in their lives. We screened 13 women that day and treated 6 for cure with cryotherapy. 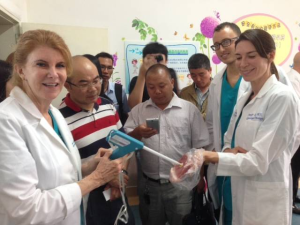 During a short visit to the third largest hospital in Yunnan Province, the CCC Team successfully introduced cryotherapy as a treatment option for CIN to the gynecologists of this hospital. We met with the Director of Gynecology and led him through the process of freezing a slab of meat with the MedGyn cryotherapy system. He was enthralled by the advanced technology and the effectiveness of the treatment, gasping and nodding his head in approval when he removed the cryotherapy gun from the beef and observed the profound depth of ice penetration. Whereas a minimum depth of 4.8mm is required to effectively treat CIN III lesions, the cryotherapy gun we work with around the world can achieve an impressive depth of 1cm. 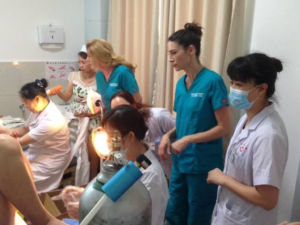 On the fifth day of the mission, the CureCervicalCancer Team traversed the countryside for over 6 hours by van and arrived in the city of Hekou. In this city located directly on the border of China and Vietnam, there is a huge rural population of women who, despite the appearance of China as a First World Country, do not have access to adequate medical care.

We knew we were needed and immediately began teaching the hospital’s healthcare staff in See and Treat. The 5 gynecologists that CCC ultimately certified in cryotherapy were bright and understood the procedure immediately. From the first patient to the last, the Chinese doctors successfully performed the procedure with members of CureCervicalCancer adopting only a supervisory role. We effectively screened 52 women for precancerous cervical lesions and treated 14 for cure.

The following day, the CCC Team had the opportunity to visit a traditional Chinese medicine hospital. We were able to smell the incredibly strong scent of the herbs as we walked through the hospital’s halls. Behind the glass of the pharmacy, we saw shelves lined with roots and Chinese herbal tonics. Surrounded by walls decorated with maps of the body’s pressure points and posters laden with Chinese characters, CCC trained and certified 12 sharp gynecologists, screened 59 patients, and treated 17 with cryotherapy.

Upon reflection of 4 incredibly productive days in China, we can predict the exponential multiplying impact of the CCC model as occurred in the 5 other countries in which CCC has a strong presence. If we train 100 local healthcare providers, those providers will not only treat hundreds of women but will also pass along their new found knowledge. CCC truly follows the concept of sustainable clinics and the empowerment of local providers who will advance women’s health long after the CCC team has moved on.