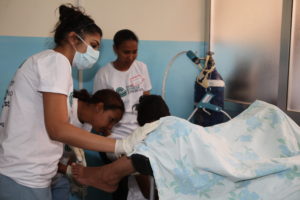 As an oncologist, cervical cancer has piqued my curiosity for a multitude of reasons. For starters, no one back home seems to pay much attention to it. While pink has become synonymous with breast cancer and the most successful advocacy movement to date, not many even realize that teal is the color commemorating thousands of lost lives. The unfortunate apathy belies how common this deadly female malignancy really is: worldwide statistics show that cervical cancer snatches 1 life every 2 minutes. What makes these numbers especially unpalatable is that this is the one cancer in which death is essentially 100% preventable. Simply put, no woman should ever perish to cervical cancer.

Unlike most malignancies, it is exceedingly unique in that we have both primary and secondary preventive measures at our disposal. The latter refers to any detection method which allows for early identification of cancer, such as the Pap smear as well as CCC’s “See and Treat” technique. Part of our first-world apathy lies in the assumption that this is a disease relegated to the developing world. While it is true that the global burden is heaviest in countries such as Vietnam and Guatemala, both sites of successful CCC clinics, the reality check is that cervical cancer was once the leading cause of cancer death for American women as well. We are relatively immune today only because of the widespread implementation of successful screening programs. It follows, then, that today’s cervical cancer has become a disease of the developing world. So although we have made immense strides in our own country, as global citizens we cannot allow indifference to set in. Instead, we must act to rectify the disparity in availability and accessibility of health care for the most vulnerable.

This is precisely the motivation behind CCC, and why screening hundreds of women for precancerous cervical lesions in Ethiopia and training dozens of native health care providers to sustain the movement has been so meaningful to me. The latest chemotherapeutic drugs and radiation techniques have no bearing in places such as these, where the vast majority of the population cannot even afford wireless internet or electricity, let alone sophisticated healthcare. What makes CCC and it’s mission truly special is the realization that prevention is the only hope for these people. And with every woman we diagnose and immediately treat, CCC continues to save lives and embody the very best of preventive medicine.