I leaned about the CCC program through my good friend Stephen. He told me about the many clinics CCC has set up around the world and the thousands of women these clinics have helped. To try and understand CCC’s work I showered him with questions, “How many patients did you treat?” “How many of those patient had pre-cancerous cervical lesions?” How many women had already developed cervical cancer?” He explained that CCC has seen over 22,000 women, of whom 12% are treated for cervical pre-cancer, with a small percentage who have already developed cancer. These numbers were crazy to me. It was hard to imagine that more than 1 out 10 women are either at risk or have developed cervical cancer.

These last two days I was responsible for recoding patient data. I intercepted the patient charts after the CCC team and the trainees finished screening and treating the patients. Yesterday’s ratio was substantially higher than past CCC programs. Yesterday, in about 3 hours of screening, we saw 51 women. Out of the 51 women, 14 had pre-cancerous cervical lesions and 1 had malignant cervical cancer. This was more than double the typical ratio! I thought yesterday’s results had to be a fluke. There is just no way that one in four women had either cervical pre-cancer or cervical cancer. Unfortunately, I was wrong. Today’s results were absolutely shocking. We screened 109 women and 32 tested positive for cervical pre-cancer, and 3 had frank cervical cancer. One in three women. It’s hard to believe. 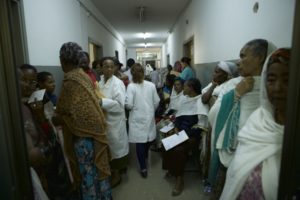 I have thrown around a lot of numbers in this post, but in my opinion, the most important number in last two days is 50. The CCC team and the local trainees detected either cervical  pre-cancer or cervical cancer in 50 women. They treated 45 of the women and helped set up follow-ups for 5 women that had already developed cancer. These women would have had no idea about their health without CCC’s help.

The percentage of women screened here in Addis Ababa has been twice and three times as high as previous trips. These numbers reflect the need of screening and treatment centers and show CureCervicalCancer’s invaluable work.